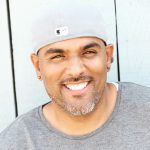 Born in Belize City and raised in Los Angeles, CA, Olin was once regarded as one of the top guards in the Los Angeles metropolitan area averaging 24 points, 12 rebounds, and 6 assists. Olin gained college interest from schools across the United States, however a college basketball career did not go as planned with injuries and his focus on being a father to his son, Kahlil Simplis. Eventually turning his passion into an opportunity to mentor his son and future generations of ball players, Olin founded Basketball Finest Training Academy.

In 2002, Olin founded Basketball’s Finest Training Academy. Over the last 13 years, BFT Academy has established itself as one of the most accredited youth basketball training programs in California. With more than 20 years of coaching experience, Olin is considered one of the most recognized basketball trainers on the west coast.

Olin Simplis has been a certified sports performance and personal trainer/basketball trainer for the past 22 years. He received a Bachelor’s of Science in Kinesiology from California Baptist University where he also played basketball. He later played professionally in South America before leading the Belizean National team to a gold medal in 1999. Olin has acquired a great amount of experience working with clients of all ages and fitness levels including NBA players, celebrities, corporate executives, and collegiate and youth athletes. As a personal trainer, Olin’s focus has been on taking a systematic approach to his client’s goals, while simultaneously rectifying muscle imbalance that will help with long-term injury prevention. By formatting a comprehensive training program, Olin targets fitness goals such as fat loss, muscle tone, bodybuilding, and overall health and wellness. He delivers transformative results through fun and creative workout sessions, not your routine gym workouts. As a Sports Performance trainer, Olin combines his kinesiology degree with basketball expertise to develop athletes at all levels. Primarily focusing on skill development, Olin has advanced his niche in maximizing athletic ability along with injury prevention.