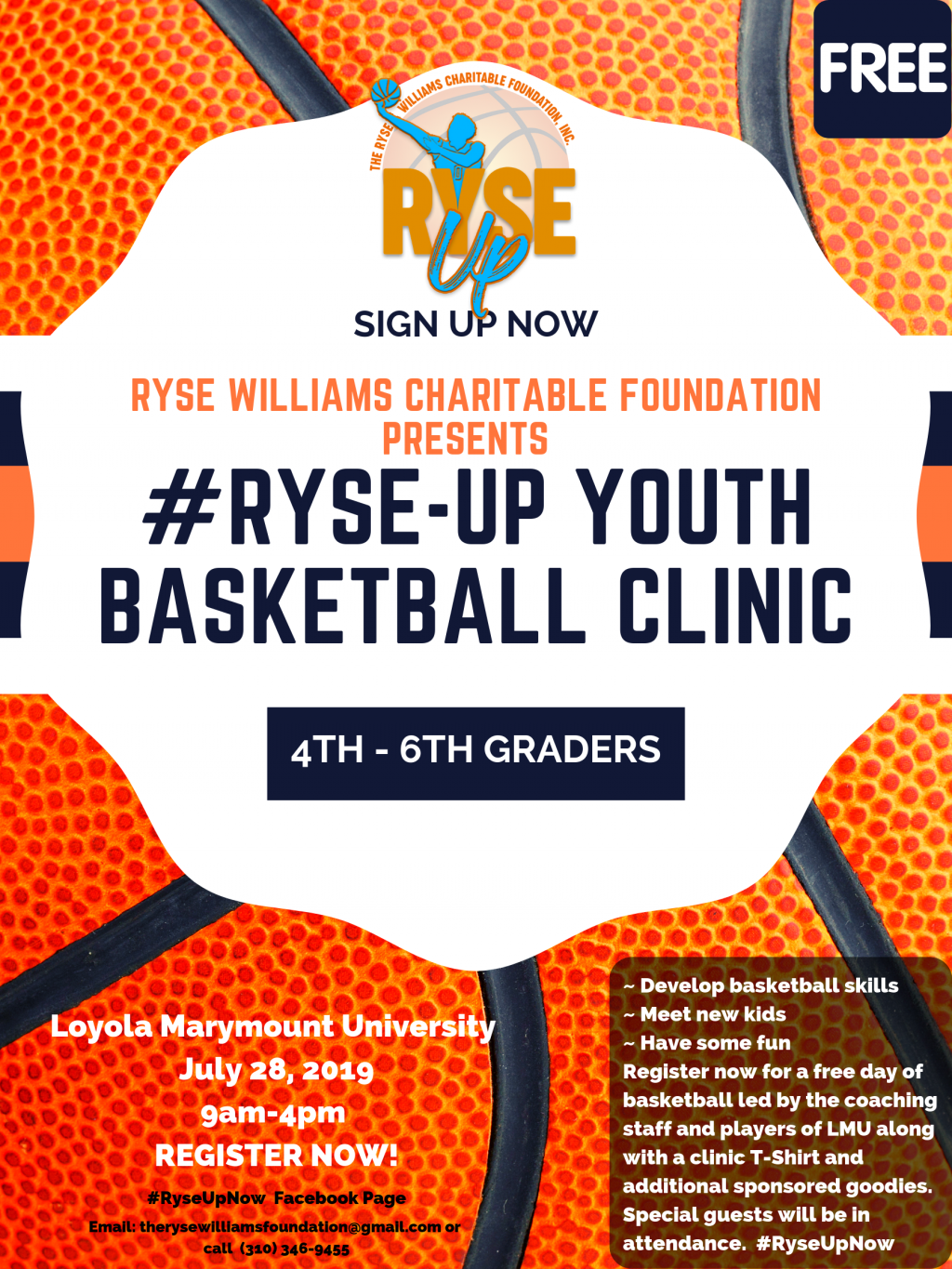 Los Angeles, CA – July 19, 2019 – The players and coaches of Loyola Marymount University will run a full-day clinic for Southern California’s 4th -6th graders on the campus of beautiful LMU at the Gersten Pavilion.

Ryse Williams was a Southern California high school basketball standout, named 2017 Bay League Most Valuable Player, who had committed to attend and play basketball at Loyola Marymount University in the Fall. But, his future was cut short by a rare and aggressive form of kidney cancer known as Renal Medullary Carcinoma, taking his life just one day before graduation. Take a look: https://youtu.be/xLEJcpACdr4

“We celebrate Ryse at every level. He was a stellar young athlete, high school athlete, and would have been an amazing college student-athlete, had cancer not taken him from us so early. So, we will work to instill some of these some of those basic, honorable ethics in these young people while having a great time learning this unifying sport of basketball, “  says Dr. O’Brey Williams, father of Ryse and CEO of the Ryse Williams Charitable Foundation.

“He was a great basketball player and an even better person. Many players, coaches, and fans want to continue to come together to raise awareness and show our love, “ Coach Roy Walker laments.

This and many other activities have taken place and continue to be supported by The City of Redondo Beach, where he went to school and The City of Carson, CA, where he is from. Ryse will always be a part of the Southern California communities that he lit up with his amazing personality and basketball skills.

“It was an honor to have this young man as a part of our community and we are always happy to support causes in his name,” says Carson Councilman Jawane Hilton.

Here are the details:

All 4-6th graders can register for FREE at https://forms.gle/yBTacp83kUDFNNUL6

The Clinic will take place:

Each participant will receive camp gear and other goodies.

Special guests will be in attendance.

Admission is $10 for spectators and proceeds will go towards the Ryse Williams Charitable Foundation.

Ryse Williams was a southern California high school basketball standout. Named the Bay League Most Value Player in 2016 and 2017 and a two-time All-Southern Section selection at Redondo Union High School. He committed and signed his National Letter of Intent (NLI) with Loyola Marymount University​. His future was cut short by a rare and aggressive form of kidney cancer known as Renal Medullary Carcinoma (RMC), taking his life just a day before graduation. This rare form of cancer affects 1 in 20,000 to 30,000 people with the sickle cell trait.