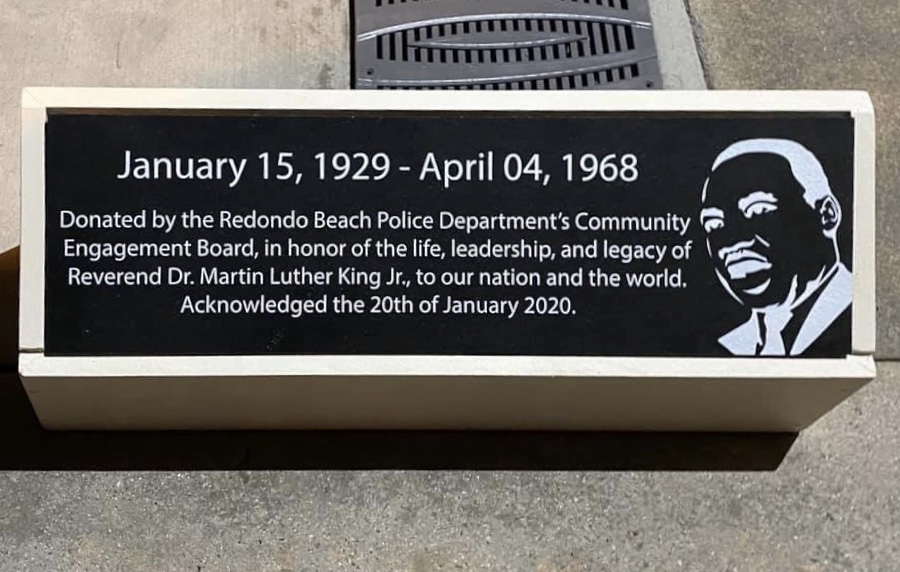 The RBPD Engagement Board, supported by the Redondo Beach Police Foundation, worked with Sand & Shores and Dr. Goodie Goodloe to pull off the very first Dr. Martin Luther King, Jr. celebration. January 20, 2020 will be a day to remember in the history of this beachside city.

With Sand & Shores handling the marketing and public relations for the event, the turnout and media coverage was optimal. The Redondo Beach City Council Members and other community members were in attendance. The speakers included Mayor Bill Brand, LA County Supervisor, Janice Hahn, and Co-Chair of the event, Dr. Goodoe Goodloe of the MLK Foundation.

Supervisor Hahn spoke fondly about her father and his personal story of an encounter with Dr. King. She explained that the MLK hospital was named by her father after that incident. Mayor Brand gave an incredible rundown of our country’s history of taking one step forward and two steps back. Our election of Donald Trump was described as taking three steps back. Dr. Goodloe gave a profound speech about the MLK legacy and leaving your own legacy based on “the dash” between your born and deceased date. All of the speakers were crowd-pleasers. The event was MC’ed by Tonya McKenzie, the event co-chair. The climax of the event was the unveiling of the permanent bench in front of the police department, funded by the Police Foundation. It is meant to always be a place where people can sit and get to know each other.

There has been a scholarship created for a Redondo Union High School student that exemplifies MLK-like characteristics. This would include displaying equality, civic engagement, and academic excellence. You can donate to the scholarship fund.

The Redondo Beach Police Department Engagement Board is lead by Captain Jon Naylor and was established to promote open dialogue, transparency, and more engagement with the community that they serve. The board is made up of residents and community members that have a sincere desire for strong police and community relationship. They have had programs that support the autistic community, domestic violence awareness, and breast cancer awareness.

It takes great partnerships, collaborations, and sponsors to pull off a great event like this. For the first Redondo Beach MLK celebration, we want to thank all of our sponsors; 1) Redondo Beach Police Foundation 2) Minute Man Press 3) Red Beach Advisors 4) GoodieGoodloe.com 5) The Redondo Beach Chamber of Commerce 6) Beach Life Festival 7) Wave Church LA 8) Starbucks 9) Merit Real Estate 10) Creative Indulgence 11) NRBBA Special thanks go out to the Corbin Jones Big Band and their amazing vocalist. It was amazing, moving, and everything that we needed to make the moment as monumental as it was. We appreciate the Redondo Beach City Council Members, Melissa Ramosa from Assemblymember Al Muratsuchi’s office and Brad Waller, president of the RB Board of Education. The support matters.

For media and public relations consulting for your organization or events like this, contact Sand & Shores at info@sandandshores.com or (424) 262-1920